Do you want a 1967 Ford Shelby Mustang 'Eleanor' In India? Check Here 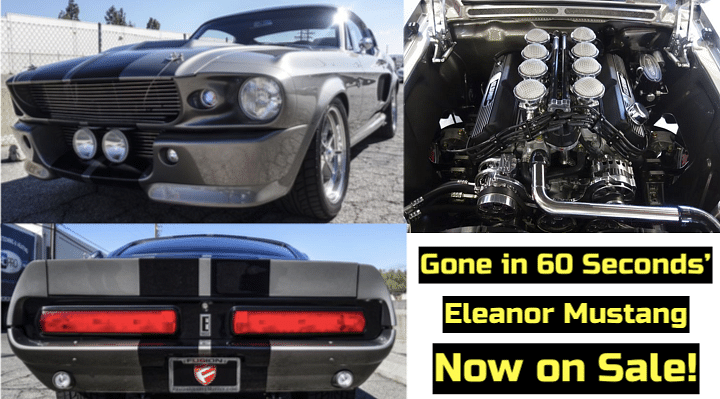 Update - Currently, the new Ford Mustang in India has been discontinued to poor sales. If the newer version of the Mustang will be launched then it will carry a powerful engine under the hood and host a lot of new features.

Cars can have a place in a family and sometimes it becomes too accustomed, that its passed down generation after generation. Well some of us never had that opportunity, so we might say, "well someday I will get my hands on it" and that is exactly the kind of sensation and emotion that the 1967 Ford Shelby Mustang GT500 fastback has had on our minds and hearts which resulted in the infiltration of our humble minds with the ambition to acquire "Eleanor". Keep reading below to know how you can get one to India as well.

The beautiful "Eleanor" originated in the 1974 "Gone in 60 seconds" film which added a parking spot in our hearts. The film became popular with the "Eleanor" which is the only Ford Mustang to get a start title. The car was originally a 1971 fastback which was styled differently in the year 1973 for the famous film which gained the cult movie status soon enough in the 70's era.

This film was something like an epiphany, an enlightenment which gave birth to many car enthusiasts and designers, well some of us here at 91 wheels are one of the enthusiasts who were inspired by this iconic car.

There are some of us who get that constant urge to hop in the driver seat and take-off. Well, this car is no joke and not meant for just the fancy looks and hence it is meant for car nuts who believe that cars are not just an object, its an emotion. There are many automobile enthusiasts who like driving whether its a crimson morning or a rainy day where we say "its raining cats and dogs mate!" and the Eleanor is one such car that is meant for enthusiasts to drive no matter what day it is.

The 2000 'Gone in 60 seconds' film has Nicholas Cage, who is the lead actor, playing the character of a thief named 'Randall Raines' AKA "Memphis" has been tasked with collecting "wait its Stealing" cars by giving secret code name which were basically female names. The Eleanor is the last car to be stolen. "well we don't want to give too much of spoilers so we stop here about the film"

Eleanor is a Ford mustang from the year 1967 which has the metallic pepper grey custom paint job and a custom body kit which was designed by Hot-Rod designer Steve Stanford. The car was made into a reality by the world famous custom car designer Chip Foose. Fusion Motor Company, a company in north of Los Angeles, makes new versions of the old Mustang. "Yes they are the ones licensed to manufacture the vehicle." So if you want to import one into India, you know whom to contact!

The body of the car is from original 1967 and 1968 models that is brought from barns, Storage containers etc. The whole shell is then refurbished and made into mint condition which we believe is done by sand blasting and coating of special rust free solutions and primer etc.

The suspension and chassis of the Eleanor is brand new and has the modern performance. The electrical work, welding and fabrication, engine and transmission work is all done in Los Angeles. Eleanor gets all the interior components and trims which are exactly similar to the original 2000 Eleanor (1967 Ford Shelby Mustang GT500 fastback) depicted in the film and to add some feel of the legendary Eleanor, you get a disconnected Nitrous tank in the boot of the car that is similar to the one shown in the "Gone in 60 seconds" film.

Fusion is the legit company that has the official rights to build and distribute mustangs specifically named 'Eleanor', since the name is copyrighted.

The base model starts at $190,000 and comes in various colours such as red yellow etc. and the customer can add personalized details as per their wish. Don't worry, you can get one in a right-hand drive version and It is shipped worldwide.

Their is a variant which costs $250,000. The engine is a Roush-made 560-horsepower V8 engine. The base variant comes with 430hp V8. You can add more horses by paying extra to equip the car with supercharged 600hp or 750hp V8. Eleanor gets a 17 inch wheel which also adds on to the perfect appearance of the car.

The car comes with power windows and other features such as a modern music system and an air condition which is standard. There is power steering also. Basically its a brand new Eleanor mustang which is old. "How about that?"

The best part we like about the interior is the "GO-BABY-GO " nitros button on the gear shifter. Its nuts right?

Well that is everything you need to know about "Eleanor" (1967 Ford Shelby Mustang GT500 fastback.) If you liked this article then please do share your comments, which we will definitely appreciate! Cheers.