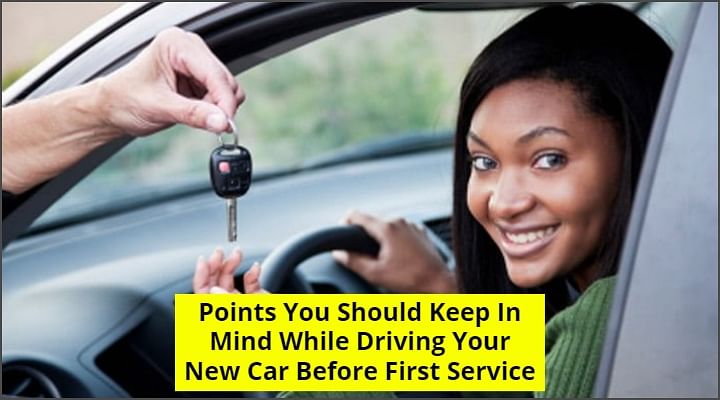 Update - We explain what steps you need to take care of driving a new car before its first service. It helps you in the long run and also helps you in maintaining your car in a good condition.

The run-in period of a new car generally varies between 1000 to 2500 kms, depending on the size of the engine. So what are some points that you can keep in mind while driving your new car before the first service? Let's discuss that below!

During the run-in period, which is generally the first 1000 or 2000 kms of your new car, many people have their excitement of driving a new car at a high. Under this excitement, the car owners need to take some extra attention in order to enhance the life of the car in a longer run. Following are some precautions which need to be taken while driving in the run-in period:

Be gentle on the throttle

Many manufacturers recommend the run-in period to be either 1000 km or 2000-2500 rpm, post which they call for the first general check-up. The run-in period usually lasts for one month in the majority of the cars, so ensure that you drive the whole kilometres (1000 or 2000/2500 whichever is required), so that the engine revs freely post that.

Drive with varying speeds and conditions

Usually, most of the new car owners tend to drive in the run-in period only for basic commutes, leading to driving in bumper to bumper traffic most of the times. This should be avoided, for there will be an unnecessary strain on lower gears. Try to drive in higher gears too by taking your car for long drives on weekends, and avoid the use of higher gears at lower speeds.

At higher speeds, the possibility of excessive stress on the throttle and sudden application of brakes in your car increases, which tends to put extra strain on the engine as well as brakes. Try not to drive past 80 km/h mark in the run in period, for at this speed, the vehicle is well under control and within the 2000 rpm mark as well.

Do not skip the first service

The first service generally requires only general checkups, with any of your minor or major query being addressed. For the fact this service doesnt involve any major replacement or top-ups, many car owners do tend to skip this first service, which shouldnt be done, in order to keep your car as well as its warranty under check.

Follow our exclusive 91Wheels Telegram group so you can get the recent updates about the Indian Automotive Industry.