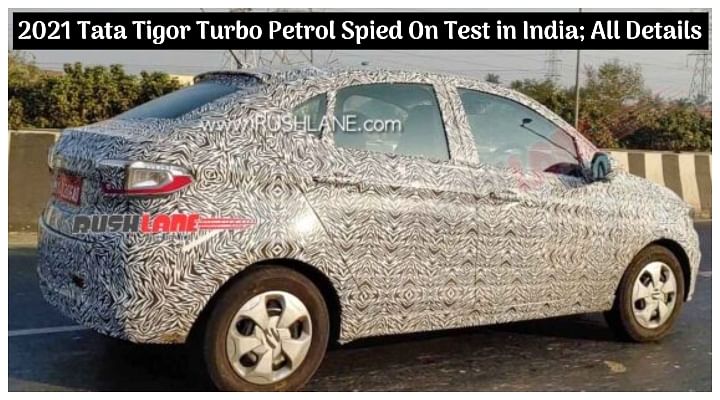 Tata Tigor is a very popular sub-4-metre compact sedan currently on sale in the Indian market. The Tata Tigor was first launched in our country in the year 2017 and earlier this year in January 2020, the company launched the new facelifted Tata Tigor in India with new styling, new features and a BS6-compliant petrol engine. However, in late-2018, the company also launched the Tigor JTP with a powerful turbocharged petrol engine but sadly, it was discontinued this year. Well, we aren't getting the JTP back but it seems that Tata Motors is planning to bring a turbo petrol mill for the Tigor. The new upcoming 2021 Tata Tigor Turbo Petrol has been recently spied on the test.

The upcoming Turbo petrol version of the Tiago and the Tigor will get the same powerplant. They will get a BS6-compliant 1.2-litre turbocharged petrol engine, borrowed from the Nexon but in a different state of tune. This turbo petrol motor will churn out 110 PS of maximum power at 5500 RPM and 140 Nm of peak torque between 1500-5500 RPM. The engine will come mated to a five-speed manual gearbox. This very same powerplant will also power the upcoming Tata Altroz Turbo. The Altroz Turbo will be launched in India very soon, most likely in January 2021. Now, talking about the other details of the Tigor Turbo, so it won't get any new features or major cosmetic revisions. However, the company might add some red accents inside and out to enhance the sporty appeal of the car.

Currently, the Tata Tiago and the Tigor get a BS6-compliant 1.2-litre, three-cylinder, naturally-aspirated petrol engine. This petrol motor churns out 86 PS of maximum power at 6000 RPM and 113 Nm of peak torque at 3300 RPM. The engine comes mated to a five-speed manual gearbox and a five-speed AMT. Both these entry-level Tata's are fairly equipped with features. Also, the Tiago and the Tigor are one of the safest compact cars currently on sale in the Indian market. They have bagged a respectful 4-Star safety rating in the Global NCAP Crash Test. At present, the 2020 Tata Tiago BS6 is priced between Rs. 4.70 lakhs - Rs. 6.74 lakhs and the Tigor BS6 is priced between Rs. 5.39 lakhs - Rs. 7.49 lakhs. All prices stick to Ex-showroom Delhi. Here are their current variant-wise prices:

Also Read: Top 5 Simple Steps On How To Keep The Paint Of Your Car Shine Like New - Details

The new upcoming 2021 Tata Tigor Turbo Petrol and the Tiago Turbo Petrol are expected to be launched in mid-2021. We expect them to charge around 70,000 - 1 lakh rupees premium over their corresponding variant with the naturally-aspirated petrol mill. The new Tata Tigor Turbo will directly rival against the Hyundai Aura Turbo. What are your thoughts on the upcoming turbocharged Tiago and Tigor? Feel free to share your opinions with us in the comments section below. You can also join our interesting 91Wheels Auto Enthusiast Telegram group (click via mobile to join) curated exclusively for the fans, enthusiasts and the owners. Further, subscribe to our YouTube channel for more such amazing motoring updates.