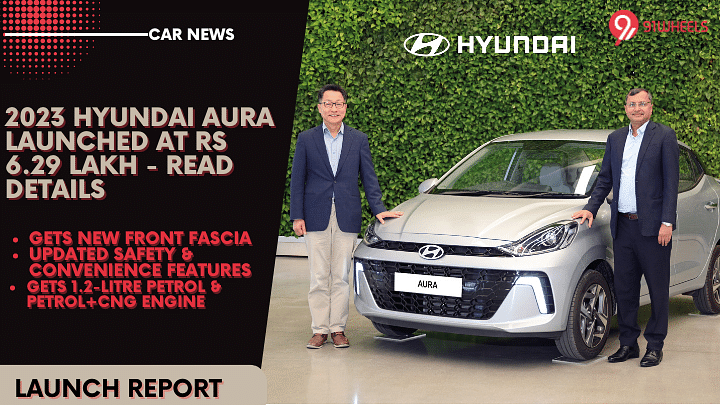 Hyundai Motor India Limited (HMIL) has launched the 2023 Aura facelift at Rs 6.29 lakh (ex-showroom). The new model receives an updated front fascia, new features, and improved safety features. With these adjustments, the brand has given its entry-level sedan a mid-life facelift. Both a 1.2-liter NA petrol and a petrol+CNG engine are available in the 2023 Hyundai Aura. Prices for the 4 models of the 2023 Aura range from Rs 6.29 lakh to Rs 8.87 lakh (ex-showroom).

Note: All the prices mentioned above are ex-showroom price

The vehicle's front fascia has undergone the most significant alterations in the facelift. The single-piece grille of the Hyundai Aura is replaced with a narrow top portion and a broader lower element, which contains the LED DRLs and sloping air ducts. The front bumper has had a small overhaul to make room for the new black grille, and it now seems more aggressive.  With the redesigned front fascia, the Aura now has a distinct identity and is no longer identical to the Grand i10 NIOS.

The Hyundai Aura facelift has a similar back and side profiles to the outgoing model. In the new redesign, the company has added a new exterior colour hue called Starry Night.

With a few modest visual adjustments, the interior of the facelift has remained the same. It receives a glossy black makeover for the dashboard, door pads, leather-wrapped steering wheel, chrome accents on the gear knob, and an 8-inch touchscreen infotainment system that supports Apple CarPlay & Android Auto, among other features. Footwell illumination, a new speedometer with a 3.5-inch MID, and a Type C fast USB charger have also been a part of the facelift.

Hyundai has not altered the vehicle's mechanical specifications. It continues to get a 1.2-litre petrol engine with an AMT and 5-speed manual transmission. It gives 83 bhp of power and a maximum torque of 113.8 Nm.  The same engine also comes with a bi-fuel option; it has a 5-speed manual transmission and can generate a maximum torque of 95.2 Nm and 69 bhp of power. The 1.0-litre petrol turbo engine for the vehicle has been dropped by the manufacturer.

Verdict: Hyundai will be able to up the ante in the segment with the new facelift. It will be an excellent choice for those looking for a safer car due to the additional safety features. Additionally, the 2023 Hyundai Aura will be a fantastic alternative for people with added safety and design. Its main rivals in India are Honda Amaze, Tata Tigor and Maruti Suzuki Dzire. 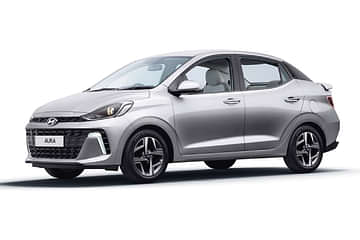