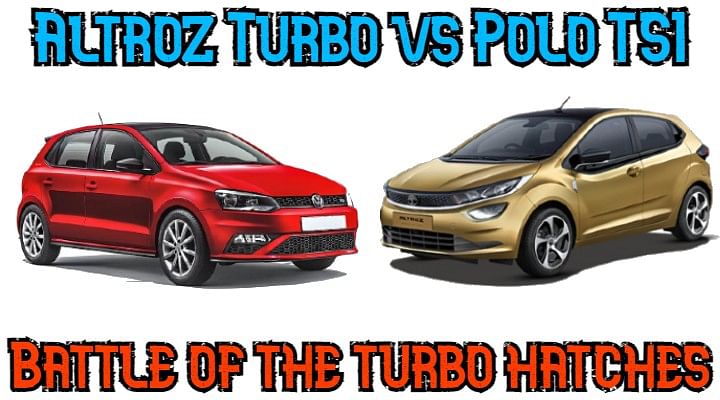 Now that the covers from the Tata Altroz turbo petrol have been taken off, read our article to know how does it stack up vs the Polo TSI. Let us see how the Tata's most anticipated variant of the Altroz stacks up against the king of the segment.

The Altroz is Tata's third attempt at making a hatchback with a turbocharged petrol engine. The first two were the Tata Bolt and the Tigor JTP. While both of them did not do well in terms of the sales, hence Tata would be hoping to get lucky for the third time as the Altroz Turbo Petrol looks to dethrone the current king.

Engine and performance - Here are the power and torque figures of the two vehicles in question.

Also read - Tata Altroz Turbo vs Hyundai i20 - You Should Pick What? Spec Comparo

While both the cars have the same amount of power, the Altroz does have a lesser peak torque on paper. But it is important to note that not only the torque band of the Altroz starts a bit earlier at 1500 RPM but it also remains flat till 5500 rpm which is a much fatter torque band as compared to the Polo TSI. The specs on paper in fact point towards the Altroz being a much more forgiving car to drive in the city.

As far fuel economy is concerned, the Polo TSI returns an ARAI claimed 18.24 kmpl whereas the Altroz turbo claims an ARAI rated 18.13 kmpl which makes the two cars very close in terms of their fuel efficiency figures

Interiors - The Polo TSI comes with a familiar interior which hasn't undergone too many changes since its launch. The black theme of the interior goes well with the sporty feeling that the hatch carries.
The dials and gauges have been the same. While it doesn't have a lot of gimmicks up its sleeve, it gets the basics fairly right. As far as in car entertainment is concerned, the Polo TSI comes VW's RCD340G unit that gets apple carplay and android auto.

The Altroz Turbo's interior is a contrast to what the Polo TSI offers. The interior layout is lot more contemporary and is aesthetically pleasing to the eyes as well. The multi colour scheme of the interior makes it feel more spacious than it actually is. The 6.5 inch floating touchscreen display and the ambient lighting system also do add to the pleasing interiors of the car. There is no doubt about the fact that the Altroz is much modern car when it comes to the interiors.

The dimensions comparison chart here clearly shows that the polo is a smaller car as compared to the Tata Altroz. The Altroz is not only spacious on the inside but also has an almost flat floor in the rear which makes it fairly easy for 5 people to sit. Also, the Altroz has a boot space of 345 litres which is nearly 25 percent more than the VW Polo's boot space which measures at 280 litres. So when it comes to space and practicality, the Altroz is clearly ahead of the Polo.

So that was our comparison of the Altroz Turbo vs the Polo TSI. Which one would be your pick? Let us know in the comments section. You can also join our 91Wheels Auto Enthusiast Telegram group (click via mobile to join) curated exclusively for the fans, enthusiasts and the owners. Further, subscribe to our YouTube channel for more such amazing motoring updates.