What Is Golden Quadrilateral And What's Its Route? 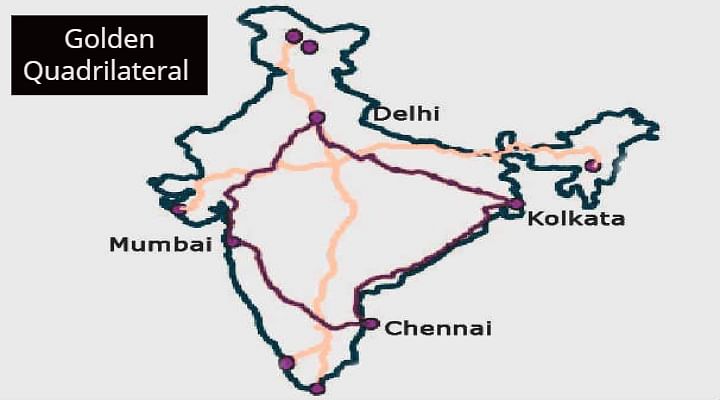 Popularly known as GQ, the Golden Quadrilateral is the result of a dream project that connects four major cities of India. Namely, Delhi in the North, Kolkata on the West, Chennai towards the South, and Mumbai covering the West.

The Golden Quadrilateral was planned in 1999, started in 2001, and finally completed in 2012. Measuring 5,846 kilometres in length, it is the largest highway in Indian and the fifth largest one in the world. The highway consists of four-lane and six-lane expressways, and the total estimated cost of construction was around USD 8.4 billion.

The construction of the Golden Quadrilateral was the first phase of the National Highways Development Project (NHDP) and was managed by the National Highways Authority of India (N.H.A.I). Mr Atal Bihari Vajpayee was the prime minister then, under whose leadership this dream project was launched and started moving closer to completion.

Sections of GQ or The Golden Quadrilateral

There are four sections in the Golden Quadrilateral, forming a straight-line route connecting two metropolitan cities each.

Segment
Metropolitans Connected
Length of route
About the Highway

I
Delhi - Kolkata
1,453 km
This route connects the National Highway NH2. This route passes through several states, including West Bengal, Haryana, Delhi, Uttar Pradesh, Jharkhand, and Bihar. The major cities that are connected through this route are Mathura, Faridabad, Agra, Allahabad, Firozabad, Kanpur, and Varanasi.

II
Kolkata - Chennai
1,684 km
This route connected parts of the National Highways NH60 and NH5. The NH60 part of this highway connects Kharagpur to Balasore, while the NH5 part connects Balasore to Chennai. The major states that share this highway are Tamil Nadu, Orissa, Andhra Pradesh, and West Bengal.

III
Chennai - Mumbai
1,290 km
The Chennai-Mumbai route is connected through three National Highways. The first part, i.e. NH46, connects from Chennai to Krishnagiri, while the second part, i.e. NH7 connects from Krishnagiri to Bangalore. And finally, the third part, covering NH4, starts from Bangalore to Mumbai. The states that this highway passes through are Karnataka, Tamil Nadu, Maharashtra, and Andhra Pradesh.

Also Read: New Tata Safari vs Mahindra XUV 500 - Which One Should Be Your Pick?

IV
Mumbai - Delhi
1,419 km
The final leg of the quadrilateral connects Mumbai to Delhi, covering four National Highways of India. These are NH8, NH79A, NH79, and NH76. The highway originates from Mumbai, passing through Gujarat and Rajasthan, bypasses Ajmer to reach Delhi. The major cities that are passed on the way are Surat, Gandhinagar, Vadodara, Ahmedabad, Jaipur, Udaipur, Gurgaon, and finally, Delhi.

GQ or the Golden Quadrilateral is one of the longest highways in the world, connecting the industrial, agricultural, and cultural centres of India. In totality, this long expressway passes through 13 states of India. This projects biggest achievement was that though the projects estimated cost was around USD 600 billion, it was completed at roughly half the cost of USD 308 billion.

The construction of GQ improved connectivity and transportation between the major cities and ports of India by multifold. A drive around this proud accomplishment by the NHDP and NHAI is worth the take. You can explore the major metropolitan cities of India and enjoy the scenic beauty of the different topographies and cultures that you experience along the way.