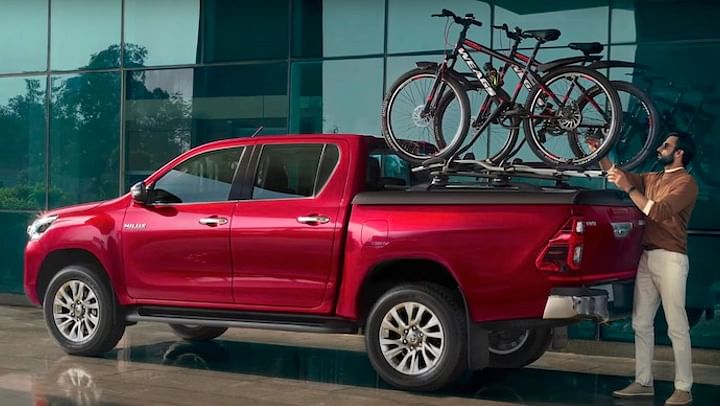 Toyota has officially launched its most popular pick-up truck, the Hilux in India. It will be available in two variants, with 4WD options as well. Prices will be announced soon.

It will be available in two variants, Low and High, and both the trims be powered by the 2.8-liter inline-4 diesel engine from the Fortuner. This unit produces 204 Ps@ 3400 rpm, 420 Nm of torque@1400-3200 rpm with the manual transmission; and 500 Nm of torque @1600-2800 rpm with the automatic transmission. Furthermore, both the variants will come with 4-wheel drive as standard, along with two driving modes: Eco and Power mode.

However, while the Hilux High model can be had with four color options: Pearl White, Emotional Red, Silver, and Grey, the base Low model can be had with just two color options: Super White and Grey. Below we have discussed some of the standout features of the variants individually, and how these two models differ from each other. But before you proceed, do join our 91Wheels Telegram and 91Wheels Whatsapp group so that you can get access to automotive news first, and also conduct discussions with other enthusiasts.

The base Hilux Low variant can be availed with a 6-speed MT with iMT transmission only. So, the 2.8-liter engine under its hood produces 420 Nm of torque between 1400rpm  3200rpm, and 204 Ps of power. The Hilux is built to venture into off-road situations, and with a tough frame with exceptional torsional and bending rigidity, the pick-up is properly built to do so. And along with a 4-WD that gets High-4 and Low-4 settings, along with Downhill Assist Control, Electronic Drive Control, and Active Traction Control, the Hilux is built to endure tough situations.

Design-wise, the base Hiluxs muscular front grille gets a silver surround, with a black finish. It is flanked by halogen headlights at both ends with integrated LED indicators. The tail lamps are also halogen units with integrated LED indicators. Aside from that, there are the electrically adjustable ORVMs, Chrome plated door handles, 17 alloy wheels, and LED fog lamps at the front and rear.

Toyota has loaded the interior of the Hilux with features. For starters, it comes with an 8-inch touch screen infotainment system, that supports both Apple CarPlay and Android Auto, and Bluetooth connectivity. The steering mounts the control to the cruise control, and behind the steering wheel, the Hilux gets a large multi-information TFT display. The seats are wrapped in soft upholstery, with metallic accents, and the second-row gets a 60:40 split ratio as well.

Passenger Safety will be taken care of by 7 airbags, rear parking sensors, and reversing camera, and Brake assists with ABS and electronic brake control.

Feature-wise, both the Hilux variants are similarly specced, but the top-spec  High variant gets some additional mechanical and comfort features as well. For starters, it gets the option of both manual and automatic transmission options. The exterior sees LED headlights and taillights, instead of halogen units, and the trapezoidal grille looks upmarket in Black Piano with chrome accents.

Speaking of which, chrome is found in abundance with the top-spec Hilux. Starting with the foldable ORVMs, to its door handles, and the steel step at the rear bumper to the alloy wheels, which are now bigger at 18-inches. Aside from that, the seats are leather-wrapped, and the drivers seat gets 8-way power-adjustable as standard. Theres also dual-zone climate control with air vents for the second row.

So, even if you dont go for the High spec Hilux, you will not miss out on any important features as such, unless and until the AT is one of them. The base spec comes with all the features for a pick-up truck that is expected to be priced between Rs. 25.00 lakhs to Rs. 30.00 lakhs. 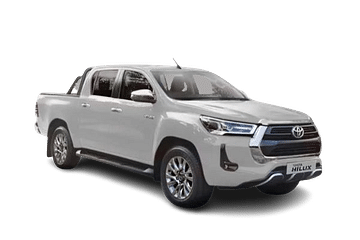