How To Install Bolt-on Oil-Cooler Kit In Royal Enfield Motorcycles? [Explained In Video] 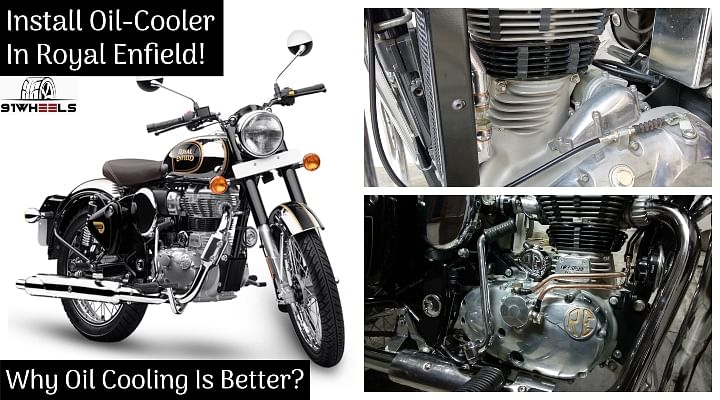 India is the largest two-wheeler market in the world and in our country motorcycles are the most widely used mode of intra-city and inter-city mobility. We have different types of motorcycles to suit the distinct needs of customers. For some, motorcycles are just meant for commuting from point A to point B while for others it's an emotion and they love to munch miles on it. Likewise, we have different technology in motorcycles and the engine cooling system is one of them. In this article, we will apprise you with some basic knowledge of engine cooling system and also with the help of a video, we will explain to you How to install bolt-on oil-cooler kit in Royal Enfield motorcycles.

So, first things first, as we all know engines convert energy produced by the burning of the fuel into mechanical energy but not all the energy generated by combustion is converted and a big chunk of it gets dissipated as heat energy. Thus, for the smooth running of an engine and to maintain optimum temperature and performance, the engine needs to be cooled down and here the engine-cooling tech comes into the picture. Basically, there are three types of engine cooling mechanism: air-cooled, oil-cooled, and liquid-cooled. Among these, liquid-cooled is the most effective while air-cooled is the least, however, oil-cooled sits in between offering the best of both the worlds (cost and functionality-wise).

Royal Enfield Motorcycles generally come with an air-cooled system which does its work fairly well but is not very effective if someone goes long-distance touring in summers and it has a few more cons too. So, what to do if you want the charm of owning a Royal Enfield but want a decent cooling technology in your motorcycle? We have a solution for you. Faridabad-based firm Venture Inc has developed a bolt-on oil-cooler kit for Royal Enfield 350cc and 500cc motorcycles. These are cost-effective, work pretty well in the long-term course, and can be installed in the motorcycle with very minimal to no changes in the engine chamber.

The developer has designed this kit himself and has been using it on his Royal Enfield Classic 500cc Chrome Edition since 2017. To install the kit, he has just removed the stock filter cover & filter and replaced it with the chrome-pipe attachment with a new filter in the holdings. The kit has been installed without any drilling or modification and has been installed on the three bolts of the stock chamber and thus it is called a bolt-on kit. It also gets a universal mounting bracket and the oil radiator has been borrowed from the Royal Enfield Himalayan. It has been designed very well to clean the sludge through pipes and fill the oil conveniently.

The designer also says that he is developing a new attachment to get the oil temperature data which will be installed at a later point of time. The current radiator panel also gets a stock radiator guard from Royal Enfield and the developer says that he is keen on developing a Version 2.0 of this oil radiator kit. He has himself tested the kit on his motorcycle for four thousand plus kilometres with a single oil change which was not required as per the user manual but he did it to check the viscosity of the oil.

Lastly, let us tell you some advantages of an oil-cooling system:

So, this was a brief article on the engine cooling system of motorcycles which highlights the different cooling mechanisms, pros of oil-cooled system, and also explains how to install an oil-cooler kit in Royal Enfield motorcycles. Frankly speaking, this kit can be very beneficial for those who go on long-distance road trips in varying climate situations and in those conditions, one shouldn't have to worry much about overheating if they have a good cooling mechanism in their motorcycle. Also, some riders gave positive feedback about it stating that using a motorcycle oil cooler can silence some engine noise, especially at higher ambient temperatures.

Which engine cooling mechanism does your motorcycle has? Share with us in the comments below.