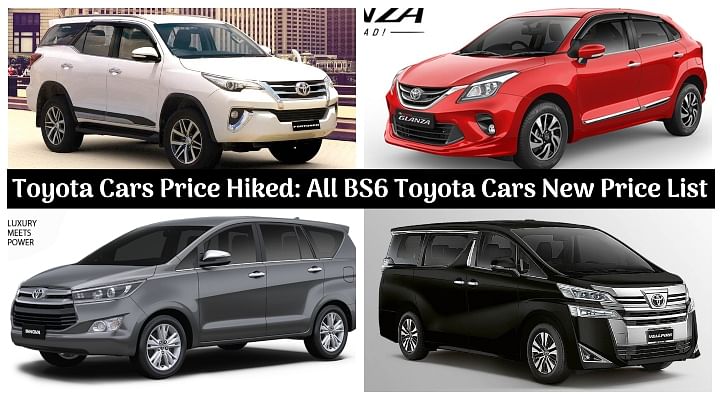 A few weeks ago, Toyota launched the BS6-compliant versions of its popular cars in India. The 2020 Toyota Innova Crysta BS6 and the Fortuner BS6 were launched in India. However, to lure the customers, Toyota launched the BS6-compliant cars at an introductory price. Hitherto, the BS6 Innova Crysta and Fortuner were priced just as same as the BS4 version. But, Toyota has now announced the realignment of prices across its models and prices have now soared up. So, here we have for you the new price list of all BS6 Toyota cars which includes the Yaris, Innova Crysta, Fortuner, Glanza, etc.

Toyota Glanza is the entry-level car in the company's India line-up. The Glanza was first launched in India in June 2019. It is basically a re-badged Maruti Suzuki Baleno and shares each and everything with the Baleno. It gets the same drivetrain, same features but sports minor cosmetic changes like the addition of Toyota's grille and logo. It is powered by two different engines of the same displacement.

The Glanza is powered by a 1.2-litre petrol engine that produces 83 PS of power and 113 Nm. It comes mated to a 5-speed manual and a 7-step CVT gearbox. The second engine is a 1.2-litre petrol engine with smart hybrid technology. It produces 90 PS of power and is paired only to a 5-speed manual transmission. It is available in two variants: G and V. The G variant is available with both the engines while the V trim gets the non-hybrid engine only. The prices have been hiked by up to 25,000 rupees depending on the variant and here is the new price list:

Toyota Yaris is a mid-size sedan from the Japanese car manufacturer. It looks really good and rivals the other C-segment sedans like the Maruti Suzuki Ciaz, Honda City, Hyundai Verna, Skoda Rapid, Volkswagen Vento, etc. The Yaris is powered by a 1.5-litre petrol engine that delivers 108 PS of power and 140 Nm of torque. It comes mated to a 6-speed manual as well as a 7-step CVT gearbox. It is available in total 14 variants, out of which seven are paired to manual and the other seven are paired to a CVT. The prices of the new Yaris have been hiked by up to 1 lakh rupees depending on the variant.

Toyota Innova is one of the most successful MPVs in India. The Innova is famous for its rough & tough build quality, premium feature-loaded cabin and punchy powertrain options. It is also very popular in the commercial segment and is used by a lot of hotels and cab aggregators. The Innova also has a sportier version called the Innova Touring Sport that features minor nip and tuck both on the exterior as well as in the interior. It is powered by a 2.4-litre diesel engine that churns out 150 PS of power and 360 Nm of torque. It comes mated to a 5-speed manual as well as a 6-speed automatic gearbox.

The Innova also gets a petrol engine. It is powered by a 2.7-litre petrol engine that delivers 166 PS of power and 245 Nm of torque. Like the diesel mill, it also comes mated to a 5-speed manual and a 6-speed automatic transmission. The prices of the Innova Crysta BS6 have been revised and the prices have now gone up by up to 61,000 rupees depending on the variant. Here is the new price list:

Toyota Fortuner is one of the most loved full-size SUVs currently on sale in India. It has a huge fan following and is famous for its off-road capabilities. The Fortuner gets both petrol as well as a diesel engine. The petrol mill is the same that also powers the Innova Crysta. It is powered by a 2.7-litre petrol engine that delivers 166 PS of power and 245 Nm of torque. The engine comes mated to a 5-speed manual and a 6-speed automatic transmission.

The BS6 Fortuner also gets its popular 2.8-litre diesel engine. This engine has a lot of punch on offer and is offered with both 4x2 as well as 4x4 drivetrains. This diesel engine churns out 177 PS of power and 420 Nm of torque. It comes mated to both a 6-speed manual and a 6-speed automatic transmission. Also, the automatic transmission churns out 30 Nm more and the figure stands at 450 Nm and it also gets paddle-shifters. The BS6 Fortuner's price has now been increased up to Rs. 48,000 depending on the variant, here is the new price list:

The above mentioned new price list of the BS6 Toyota cars have already come into force from June 1, 2020. The car manufacturer has also announced that it will increase the prices of the Toyota Camry Hybrid and the recently launched Vellfire luxury MPV. According to Toyota, both these models have received overwhelming response since its launch and the price hike has been necessitated due to the substantial rise in the exchange rate. The new price of the Vellfire and Camry Hybrid hasn't been revealed yet but it will come into effect from July 1, 2020.

Lastly, talking about the most expensive Toyota currently on sale in India. The Toyota Vellfire is a luxurious MPV and no other MPVs can match its opulent design and exquisite interiors. It is also powered by a hybrid powertrain that consists of a 2.5-litre petrol engine and two electric motors. The petrol engine churns out 117 PS and 198 Nm of torque while the front motor delivers 143 PS and the rear motor churns out 68 PS. It is mated to a CVT gearbox and also gets an electronic 4WD system. Currently, the Toyota Vellfire is priced at Rs. 79.50 lakhs, Ex-showroom and it's a CBU import that directly rivals the Mercedes-Benz V-Class.

So, this was all about the new price list of the BS6-compliant Toyota cars. Which Toyota car you love the most? Share with us in the comments below.