Renault Kiger Vs Nissan Magnite - Which One To Buy? 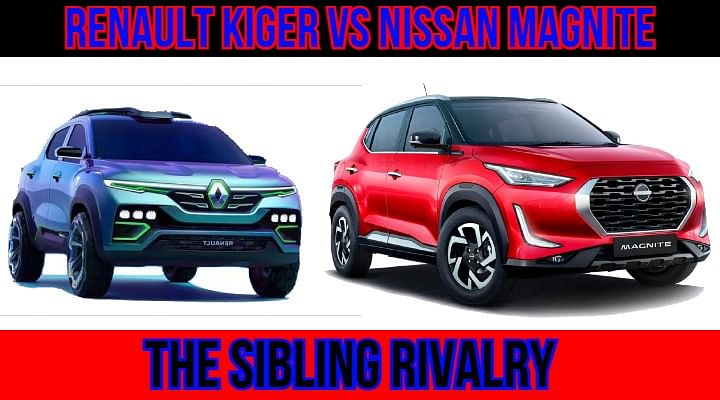 Here is our comparison of the Renault Kiger Vs the Nissan Magnite which will help you decide which of the two siblings will be coming to your garage soon.

So how do the two vehicles which so similar yet so different stack up against each other?

1. Powertrain options - In terms of the power train options, both the vehicles get the following engines.

While both the cars have the same set of engines, the Renault Kiger is the one out of these two which gets an automatic gearbox option for both the engines. The base 1.0 naturally aspirated petrol comes 5-speed manual or a 5 speed AMT gearbox as well while the Turbocharged petrol variant gets 5-speed manual or a CVT gearbox like the Magnite.

2. Interiors and Space - The two cars in question here are essentially the same ones. So the space offered by the Kiger is going to almost the same as that being offered by its Nissan sibling due to the same wheelbase that measures in at 2500 mm. However, it is to be noted that the Kiger has a nearly 70-litre boot space advantage over the Magnite (405 litres vs 336 litres in the Magnite).

Both the cars sport a different dashboard layout as well. The Magnite has more a neutral layout which looks fairly plain-jane while the Kiger actually does a pretty decent job in pretending to look like car one segment above it. Elements such as a floating touchscreen unit on the Kiger help it look a bit more premium compared to the Magnite.

Also read: Made in India Skoda Kushaq To Come In March - Gets 3 Gearbox Options

3. Features - Once again, this is another aspect where the Magnite and the Kiger match up a lot while having something unique to them. Being a crucial product for both the brands, the cars are loaded to the hilt in terms of features.

As far as the Kiger is concerned, the features that help distinguish itself from the Magnite include an Arkamys sound system, a pm 2.5 air purifier and a drive mode selector that helps you toggle between 3 drive modes namely - sport, eco and normal. Another interesting point worth noting is that the gauge cluster of the Kiger has a better look and feel than the one on the Nissan Magnite. In addition to these missing features, the Magnite also has to do with a JBL sound system.

It is highly likely that many of you will compare the Renault Kiger vs the Nissan Magnite and this is going to put you in dilemma. If you want something that has a better aesthetic appeal when it comes to the interiors and also want something with a better boot capacity, the Kiger fits the bill perfectly. However, if you want a car which is somewhat fun to drive but isn't too expensive, the Magnite does the job pretty well.

This was our review of the Renault Kiger vs Nissan Magnite. Let us know what would be your pick out of these two very capable SUVs in the comments section below. Do subscribe to our YouTube channel for amazing motoring updates. Also join our 91Wheels Auto Enthusiast Telegram group (click via mobile to join) curated exclusively for the fans, enthusiasts and the owners.