BS6 Compliant CF Moto 300 NK Launched in India - Should You Buy It? 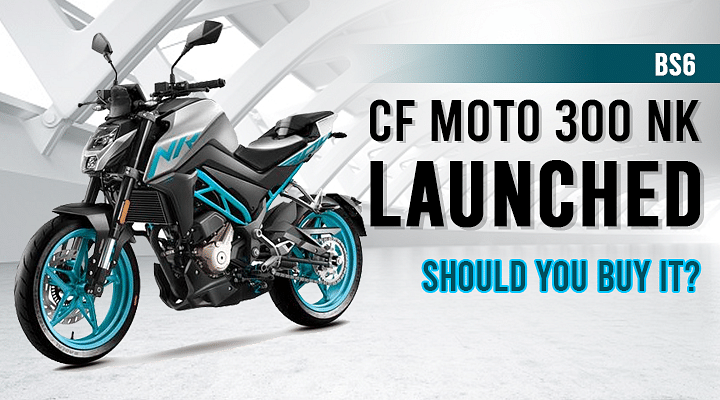 CF Moto forayed into the Indian market around two years ago, in July 2019, with a bang. The company launched not just one or two but four all-new motorcycles at a single launch event. Initially, these motorcycles created a lot of buzz in the market. That's because they undercut the price of all its rivals and that too by a huge margin. However, post that, we didn't get to see anything from the company. But now, CF Moto has finally launched its first BS6 compliant motorcycle in India. The price of the new CF Moto 300 NK BS6 starts at Rs. 2.29 lakhs, Ex-showroom Delhi.

The price of the new BS6 compliant CF Moto 300 NK is very impressive as it has been launched at the same price at which its BS4 version was launched around two years ago. It again undercuts all its rivals by a huge margin but not many people know about this brand. Also, the bike manufacturer has a very limited number of dealerships in India and that's a huge drawback. To be precise, the company has only five dealerships in India with no presence in the Northern, Eastern and North-eastern part of the country. Thus, one needs to be very careful before booking this motorcycle for themselves.

Now, talking about the new BS6 CF Moto 300 NK, so the motorcycle doesn't get any cosmetic changes. It still looks the same as before and is available in two colour options. They are Brown with Black and Blue with Grey. Also, if we talk about the mechanicals, so the motorcycle is now powered by a BS6 compliant 292.4cc, single-cylinder, liquid-cooled engine. The exact specs of the BS6 motorcycle haven't been revealed yet. The BS4 motor used to churn out 33.9 PS of power at 8800 RPM and 20.5 Nm of peak torque at 7200 RPM and we believe, the power and torque output figures of the BS6 version will remain more or less similar to the BS4 model. The engine comes mated to a 6-speed manual gearbox.

The CF Moto 300 NK gets USD forks at the front and a mono-shock absorber at the rear. For braking duties, it gets disc brakes at either end with a dual-channel ABS as an additional safety aid. The price of the new CF Moto 300 NK BS6 is Rs. 2.29 lakhs, Ex-showroom Delhi. It rivals against the BMW G310 R, KTM Duke 390, etc. What are your thoughts on the new CF Moto 300 NK BS6 and does your city have a CF Moto dealership? Do feel free to share with all of us in the comments below. You can also join our 91Wheels Auto Enthusiast Telegram group (click via mobile to join) curated exclusively for the fans, enthusiasts and owners. Further, subscribe to our YouTube channel for more such amazing motoring updates.