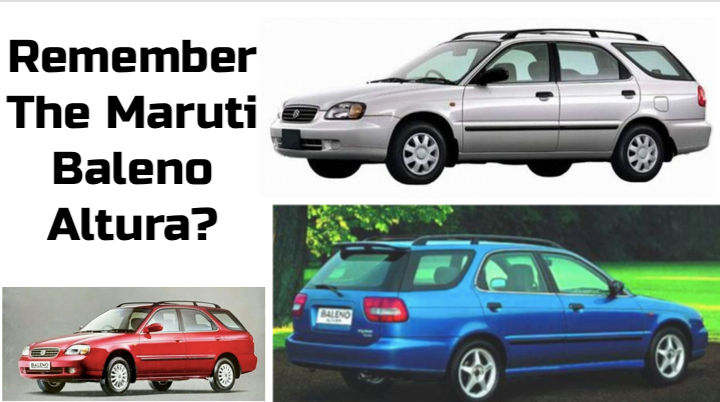 We all have been aware of the name Baleno from Maruti. Well, of course, who wouldn't as the premium hatchback competes with the likes of Hyundai Elite i20 and Honda Jazz. Not to mention, it is the best selling car among its segment. But, not many people are aware of the fact that Baleno was first sold as a sedan which was highly popular and then Maruti introduced the Baleno Altura which was a station wagon.

Maruti wanted to see how the Indian markets respond to the concept of station wagons and that's why brought in Baleno Altura. It was first introduced in 2000 at a starting price of Rs 8.20 lakh. That was a lot to ask for at that time.

The whole idea was to check how the market responds to this concept and that's why the Baleno Altura had to compete with station wagons from its lower segment. That segment comprised of Opel Corsa Swing and Fiat Siena Weekend.

Styling-wise, the front profile was kept similar to that of the sedan which featured halogen headlights with chrome front grille and square shape foglight housing. The side profile lacked alloy wheels and the roof rails just added a pinch to the station wagon image.

For some, the Altura looked better than the Baleno sedan but then that's a topic we won't be discussing here. At the rear, the wraparound flush-mounted rear windscreen gave it an upmarket look. Like the exteriors, the interiors were just plain boring. Sorry, if I had to be honest here.

It looked like a typical Japanese car with low quality plastic and trims. The manual AC controls, all four-door power windows, Kenwood music system, height-adjustable steering and internally adjustable rear view mirrors were some of the features the Altura received.

Compared with the sedan, the Altura provided much more generous space on the inside. The rear bench was the widest in its segment thus adding up to loads of space. The seats were nicely raked and a good amount of leg space was there even for a tall person.

Under the hood, the Baleno Altura carried a 1.6-litre inline four-cylinder petrol motor that pushed about 96 bhp and the engine was mated to a 5-speed manual gearbox. Well, even if the car is not in the Indian markets for sale officially, there are many pristine examples from down South which bring alive the Altura altogether.