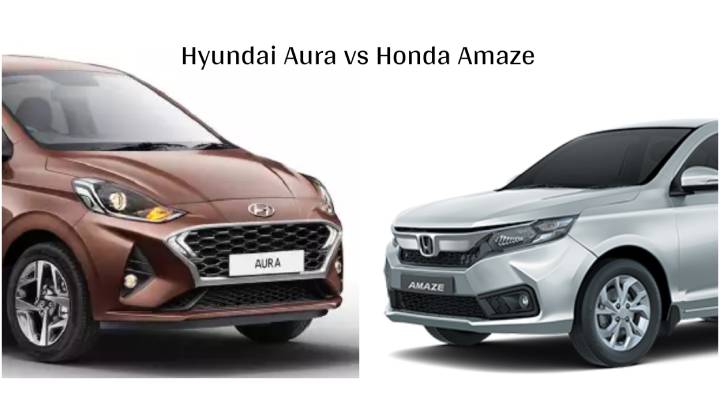 Hyundai has launched the Aura and the pricing for the same sits at a competitive price when compared with its rivals. The sedan is a successor to the Xcent with refined engines and updated features. Coming back to the point, we did a comparison of the Hyundai Aura with the segment leader, Maruti Dzire - Read HERE. Now, it'd be unfair not to compare Hyundai Aura vs Honda Amaze. The Amaze is the second best seller in the segment after all.

Clearly in our previous comparison of Aura with Dzire, the latter took the lead in this department. And in this result too, the Aura loses the count to Amaze. However, in terms of height, Hyundai Aura is 19 mm taller than Amaze.

While we saw that Aura has lost its place with both its rivals in terms of dimensions, it'll be the addition of a turbo petrol engine and segment-first features which will segregate the car from the rest. The 1.0L turbo petrol motor is sourced from the Venue but is detuned for better fuel efficiency. The other 1.2L kappa engine will be the same as Xcent but now in BS6 form.

Talking about Honda Amaze, then it gets a 1.2L, four-cylinder naturally aspirated petrol motor. It produces 90 bhp on tap with a maximum torque of 110 Nm. Unlike the Aura which gets an AMT gearbox, it gets a better performing CVT unit that does not compromise on acceleration or gear-shift quality. A 5-speed manual transmission is standard.

There is no surprise from Hyundai as the Aura will continue to use the 1.2L, four-cylinder, turbocharged diesel engine as before but now in a BS6 form. Transmission wise it'll come with a 5-speed manual gearbox along with an AMT for the convenience.

Also Read: 2020 Hyundai Creta To Be Showcased At Auto Expo

Comparing it with the Aura, Honda Amaze gears up because of the punchy 1.5L oil burner. This diesel engine produces 99 bhp along with 200 Nm of torque and gets 5-speed manual gearbox. Another point where the Amaze bags ahead of all of its rivals in this segment is the availability of a CVT gearbox in the diesel engine. However, the motor is not punchy as its manual counterpart as it only produces 79 bhp along with 160 Nm of torque.

Bookings for the Hyundai Aura have already begun at Rs 10,000. The ex-showroom prices for the same starts at Rs 5.80 lakh while the top-spec trim is priced at Rs 9.24 lakh.

Honda Amaze is priced higher at Rs 5.95 lakh and its top model fetching till Rs 9.81 lakh. All prices mentioned above sticks to ex-showroom, Delhi. Do note that Honda has yet to announce pricing for BS6 engines and that might be higher than the current figures.