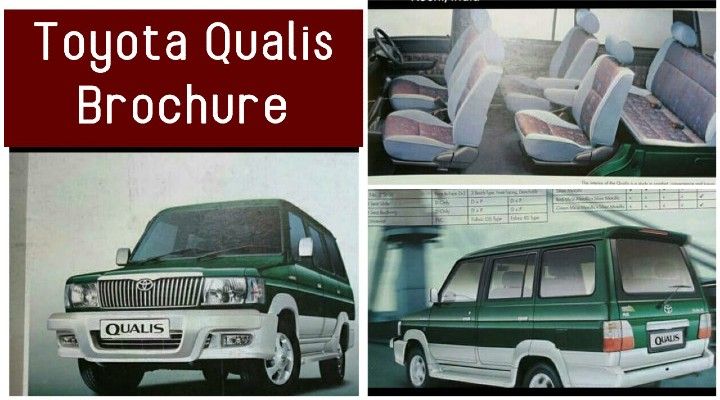 Toyota entered the Indian market in 2000 and launched the Qualis as its first product. Ever since then, the Qualis turned to be a hot-selling product as it was not just comfortable and luxurious but came with supremely reliable engines. In this series of Walking Down The Memory Lane, we bring you the Toyota Qualis Brochure images. Hold on to your seats tightly as we dive into the journey down the memory lane.

The Toyota Qualis came with a very spacious cabin. The seats were comfortable, there was ample amount of headroom and legroom, and the third row was decent to be sat in for the grown-up adults. There were three seating configurations on offer out of which it was the 7-seater variant which was most comfortable. This variant came with captain seats in the middle with dedicated rear-seat ac vents.

Powering the Toyota Qualis were two engine options. The first engine was a 1 RZ-E petrol engine which made around 93 PS and 150 Nm of peak torque. The other engine on offer was a 2.4-L Diesel engine which produced 75 PS while the maximum torque output was 151 Nm. Both these engines came mated to 5-Speed MT and were extremely reliable engines which made the car an instant hit in the Taxi market. However, soon after the launch, the petrol engine was taken off the shelves due to its poor demand.

Check this Out: HM Contessa Classic Brochure - Walking Down The Memory Lane

The Toyota Qualis came with a number of safety features such as crumple zones, collapsible steering column, side door beams and three-point ELR seat belts. Other features included central locking, power steering, power windows, rear spoiler, rear wiper and dual A/C. All these features were a part of the standard package which was offered in the top-end variant.

The car was available in three colour options - Blush Silver, Deep Teal and Dark Red and rivalled against the cars such as Tata Sumo and Mahindra Bolero. Toyota Qualis higher trim, also known as the GS came at a sticker price of Rs 7.4 lakh and worked out to be one of the most VFM products in the market at that time. However, the Qualis was replaced with the Innova in the Indian market.

Join the discussion about the Toyota Qualis Brochure on our 91 Wheels Auto Enthusiasts Whatsapp Group. (Click on the link to continue)