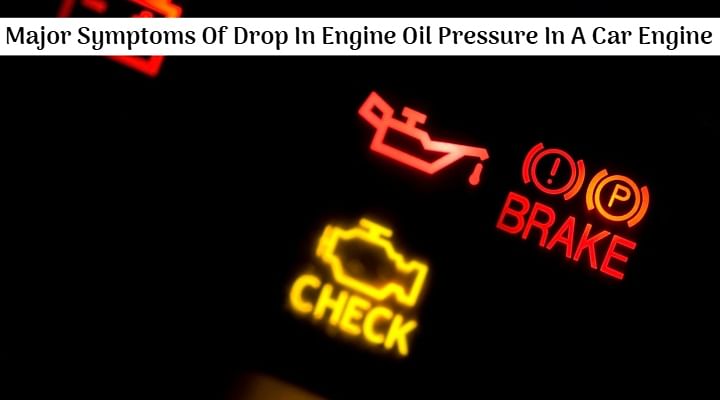 Low Oil Pressure Warning Light - This is the most common symptom which clearly signals that there is not sufficient amount of engine oil for lubrication. Whenever such a circumstance happens, the low oil pressure warning light starts glowing in the instrument console.

Overheating of Engine - If there is not sufficient amount of engine oil present in the engine, the friction between the metallic components will increase. This will naturally produce a lot of heat, which will be signalled to you through the engine temperature gauge, and thus the engine will be subjected to overheating.

Burning Smell - The drop in oil pressure in the engine might lead to spillage of engine oil on other functioning parts of the engine which operate at higher temperatures. If the spilt oil continues to be on the same spot for a long time, they will start emitting burning smell.

Grinding Noises From Engine - If there is an increase in friction between two metallic components due to a reduction in friction as a result of the drop in engine oil pressure, the components will start producing a grinding noise.

Also Read: Skoda Kushaq To Make Its India Debut On This Date - Know All Details Here

So, these were some of the major symptoms of a drop in engine oil pressure in a car engine. Have you ever faced any such problem with your car? Do feel free to share your opinions with all of us in the comments section below. You can also join our 91Wheels Auto Enthusiast Telegram group (click via mobile to join) curated exclusively for the fans, enthusiasts and the owners. Further, subscribe to our YouTube channel for more such amazing motoring updates.