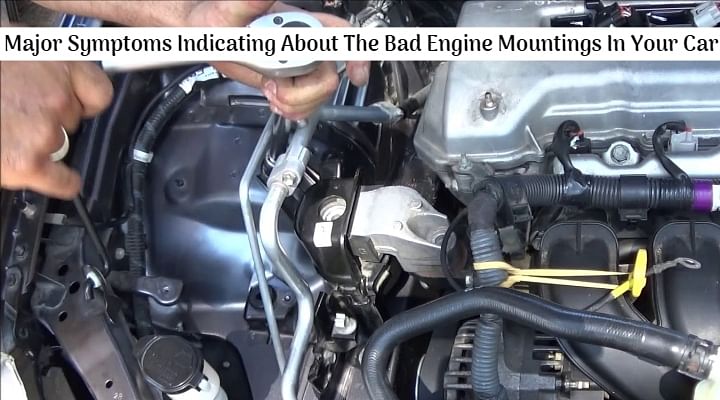 The mounting of the engine on the chassis of your car should be properly done, which only helps in absorption of vibrations, thus preventing them from translating into the cabin. This helps in making the overall driving experience smooth and free of unnecessary jutters and jerks. The proper mountings of the engine in your car should be proper, because they help in absorbing vibrations produced by the engine, thus not transferring them into the car cabin. If the mountings of the engine break, the internal components of the engine will get severely damaged, apart from the obvious damages to the chassis of the car. So, today in this article, we have shared with you the top five major symptoms indicating about the bad engine mountings in your car.

Now, if the engine mounting snaps off or is about to break due to improper reinstallation of the engine or very rough driving over broken patches of roads, it will not only damage the chassis, but also the internal components of the engine. Following are the common signals which tell you that there is something wrong with the mountings of the engine in your car:

Vibrations Inside The Car - The most common indication of a bad engine mounting, the engine will start shaking vigorously which can be felt inside the cabin as well. These vibrations will be more prominent when you are driving alone without any co-passenger.

Engine Feeling Bouncy - Whenever you put your feet on the accelerator, and the engine under the bonnet of your car (or at the rear in some exclusive cars) starts bouncing right and left, that's a clear indication that the mounting of the engine is not proper. Also, the engine might bounce up and down if your car hits a speed breaker or pothole.

Damaged Drive Belts - The drive belt in the engine of your car is one of the most sensitive components of the engine as a whole. The constant heavy vibrations of the engine might lead to an increase in tension in the belt, leading to its breakage. If this happens repeatedly, it means that the mounting of the engine needs to be checked.

Strange Noises From The Engine - When the engine shakes or trembles due to bad mounting, you can hear strange clanking noises from the engine. These noises are produced due to consistent movement of the engine and rubbing off from its mounting points.

Misalignment Of The Engine - After your engine has been aligned by the mechanic at a service engine, if you are able to witness any form of misalignment after you drive your car for a few distances, the engine might have been dislocated from its original position or gets tilted.

So, these were the top five major symptoms indicating about the bad engine mountings in your car. Have you ever faced any such problem with your car? Do feel free to share your opinions with all of us in the comments section below. You can also join our 91Wheels Auto Enthusiast Telegram group (click via mobile to join) curated exclusively for the fans, enthusiasts and the owners. Further, subscribe to our YouTube channel for more such amazing motoring updates.