Check Out The 5 Best Hybrid Cycles Sold Under Rs.20000 In India 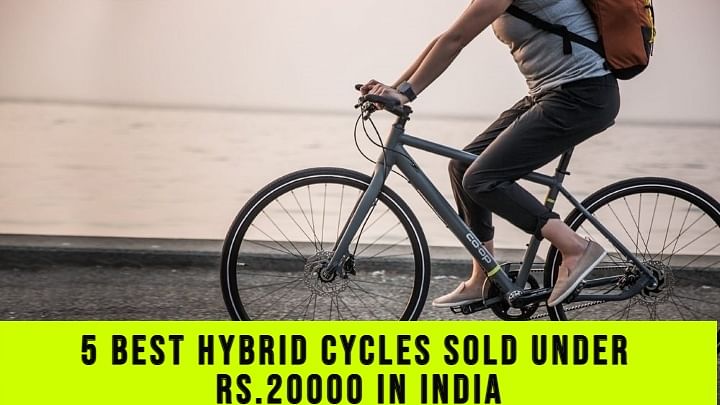 Are you planning to buy a hybrid cycle for your daily commute or for occasional rides? You have come to the right place since we have presented the 5 best hybrid cycles sold under Rs.20000 in India. Give it a read!

Cycling is not just another hobby that involves physical movement. It is much more to a cycling enthusiast. To most of the pros, seeing a cycling club or group is like a child entering into a toy store. Every time they cycle, it is not just riding that pushes them to achieve the impossible but it is the experiences like the wind in the hair, the sight of crimson sunsets and sunrises, and the happiness of chasing clouds.

Cycling is indeed a fun activity even as it is a tiresome venture. The beauty of it is that anyone of any age can try cycling. It is one of the universally accepted challenges that gives immense pleasure to anyone irrespective of age. The love for cycling can begin at a young age too.

We believe strongly that your desire for cycling is at its peak, Why wouldn't it be? After all, cycling is a fun activity! but we do know that some of you have tight schedules which makes it extremely difficult to find time for trying out cycling, however, there is one thing that you could do. It is to buy a hybrid cycle to experience the immense pleasure of cycling on your daily route to work. You should give Hybrid bicycles a try since they are easy to ride and will give you the combined looks of a street and a mountain bike. It is the new trend.

So without further ado, we would like to introduce the 5 best hybrid cycles sold under Rs.20000 in India. Give this article a read to know their features in detail.

Also Read: Here Is A list Of Top 5 Affordable Bicycles For Women Sold In India

If you are looking for an Indian bicycle brand that has European standards of build quality then the Waltx Trak 3 is the best bicycle for you. This bicycle is easy to ride thanks to its lightweight frame. This makes it extremely agile and manoeuvrable to ride through tight roads and winding lanes.

The frame has been designed to give an upright riding posture, making it a comfortable bicycle to ride. It gets a 21 speed Shimano Tourney gear system which is smooth and slick while shifting. The bicycle also comes equipped with mechanical disc brakes which is essential in panic situations. In addition to this, it gets a 700 x 35c tyre set for rolling faster and having a steady ride. The tyres are mounted on double-walled alloy rims for improved stability in tough conditions.

The bicycle is priced at approximately Rs.17,000, worth your money since it gets all the features necessary for a comfortable and safe ride.

Bike Ark is another Indian bicycle brand that is known for its practical design and aesthetics. The bicycle comes with colour coded rims which makes its appearance extremely likeable. The bicycle is constructed on a hi-tensile steel frame which has durability. The rider gets a good riding posture thanks to the design of the steel frame.

The Bike Ark Jaz gets a 21 speed Shimano Tourney gear system like the Waltx Trak 3 bicycle which makes every ride smooth and comfortable. It is equipped with caliper braking system that provides balanced stopping power. In addition to this, the bicycle rolls out of the factory with tyres of the size 700 x35c which are durable and has lower rolling resistance.

The Bike Ark Jaz is priced at Rs.15,999 which makes it an affordable hybrid bicycle loaded with features necessary to tackle tough road conditions.

There is no need for an introduction to Firefox since it is a well-established company that manufactures different varieties of bicycle. The manufacturer claims that the Firefox Voya 700c is a unisex hybrid bicycle. The bicycle is built to last thanks to the alloy frame. This makes it extremely comfortable to ride even on gravel roads. The bicycle comes with a handlebar and frame positioned to give a good stance and riding posture. Since the bicycle comes with an alloy frame, the rider can easily control and manoeuvre the bicycle through tight lanes and bad section of roads.

The Firefox Voya 700C is equipped with V-brakes that provides a decent level of brake bite which is necessary to stop in a panic situation. It also comes with tyres that provide good ride quality and traction while taking sharp turns.

The Firefox Voya 700C is priced at Rs.16,200 which is worth every penny since you get a cycle that is from a popular brand known for quality products.

The WaltX Trak 4 is positioned above the Trax 3 bicycle lineup which is a robust bicycle. The Trak 4 is built to last thanks to its full alloy frame that comes fitted with a front suspension and a lock-out.

Basically, a lock-out feature on a bicycle makes the ride smoother even while riding on a bad section of a road. In addition to this, such a suspension setup allows the rider to keep a good pace and move faster on flat surfaces. The Trak 4 also gets a similar functioning suspension setup with a lock-out function that makes rides effortless.

This bicycle is priced at Rs.22,078 since it has lots of features on offer and is one of the best hybrid bicycles in the market. This bicycle is worth every penny.

Also Read: What Are E-cycles and How Do They Work? All That You Need To Know

The Triad X4 is one of the successful hybrid bicycles currently in the market. The X4 offers superior built quality and comes with a full alloy frame that is meant to provide premium looks and superior comfort. The bicycle's alloy frame is lightweight and is a comfort-oriented design that has practicality.

On the feature side, the Triad X4 gets front suspension with a lock-out feature that makes every ride as smooth and slick as possible. The bicycle comes with features such as a 21 speed Shimano Tourney gear system that is smooth while shifting and also powerful mechanical disc brakes that provide superior braking performance.

The Triad X4 is priced at approximately Rs.20,000. It is worth the purchase since it has a lightweight alloy frame which makes riding a breeze.

Which bicycle would you choose from these 5 best hybrid cycles sold under Rs.20000 in India? Please tell us your thoughts in the comment section below. Also, join our 91Wheels Telegram and 91Wheels Whatsapp group to know more about vehicles, conduct discussions on your favourite ride and much more!