Kia Sonet Pros and Cons - Does it Justify the Premium Price Tag? 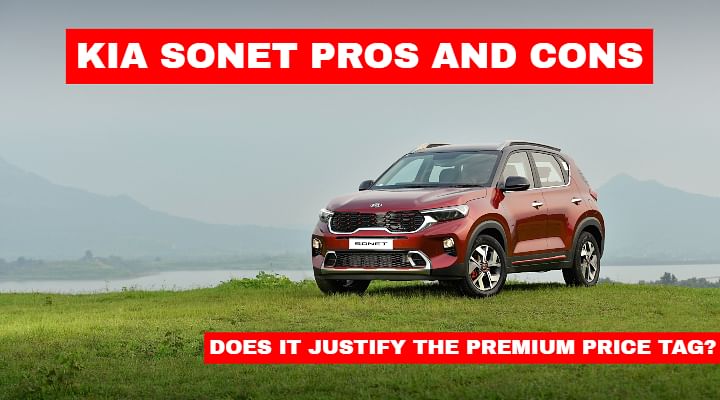 Update 10/05/2021 - Kia has brought in a new Sonet with an updated logo, features and prices. The company SUV now comes in six variants only - HTE, HTK, HTK+, HTX, HTX+ and GTX+. The 1.0L petrol with DCT and the 1.5L Diesel with AT configuration now comes with HTX instead of HTK+. You can check out more details here.

Kia Motors India witnessed an amazing start in the Indian market with the success of the Seltos. Kia Motors India became the first carmaker in India to cross 1,00,000 sales mark in less than a year. The Kia Sonet, which is based on the Hyundai Venue, took the market by storm and became one of the most selling sub-compact SUVs. After driving the Kia Sonet extensively in the NCR region, we share with you the pros and cons of the Sonet and does it justify its premium price tag.

The Kia Sonet comes with a diversified range of powertrains and all the engines are frugal. The base 1.2-litre petrol is for the buyers who are looking for value and practicality. The base engine comes only with a 5-speed manual whereas other engines come with gearbox options. The 1.0-litre turbo petrol offers great performance along with fuel efficiency and Kia has paired it with 6-speed iMT and 7-speed DCT. The last one is the 1.5-litre diesel engine which comes with a 6-speed manual and 6-speed AT.

Kia Sonet is based on the construction of the Hyundai Venue and even shares the powertrains. However, Kia has somehow managed to increase the height, ground clearance and boot space of the Sonet. Kia Sonet offers a boot space of 392 litres and ground clearance of 205mm. The height of the Kia Sonet is also considerably more than that of the Venue which lends it a better SUV appeal.

The Kia Sonet comes with a ton of features and brings in a lot of them straight from the Seltos. The 10.25-inch touchscreen infotainment of the Sonet is the biggest in the segment. Moreover, we get features like electric sunroof, wireless charging with cooling, ventilated seats, smart air purifier, cruise control, multi-functional steering wheel, rear AC vents, BOSE sound system and a lot more. The Sonet is undoubtedly the most equipped car in its segment.

The Kia Sonet is the only subcompact SUV in India to offer a proper diesel automatic option. The powertrain is carried over from the Seltos which is now offered in other Hyundai cars as well. The diesel engine puts out 115PS and 250 Nm of torque, mated to a 6-speed true automatic gearbox. Though the GTX Plus diesel AT is expensive, it is affordable when you compare it with the competition. The chief rivals of the Sonet are Nexon and XUV300 and both these sub-compact SUVs only offer AMTs. The Sonet on the other hand offers true automatic at not so premium price.

The Kia Sonet is a great subcompact SUV overall but space quotient is not justified. The Hyundai Venue and the Kia Sonet both lacks the sense of space and the rear legroom is not that impressive either. Given the premium Kia asks for the Sonet, you better shift to the compact SUVs like the Creta or the Seltos if outright space is your priority. Furthermore, the connected instrument cluster and touchscreen bezel takes up a lot of space and hampers the visibility in the smaller Sonet.

Not so Supple ride

Kia Sonet is largely different from the Venue despite sharing the underpinnings. Kia has gone for a stiffer suspension setup whereas the Venue gets a comfy one. The bump absorption in the Sonet is not that impressive and you have to get slow over sharp bumps. In turn, the handling of the Sonet is considerably better than that of the Venue. But as comfort is given more priority in the space of sub-compact SUVs, the Sonet lacks in that department.

Some Glaring Omission of Features

This may sound confusing as we just called Sonet a very feature-loaded car. However, dig deeper and you will realise that Kia has left some problems unaddressed. For instance, we do not get the option of 60:40 split rear seats, even in the top trims. Moreover, the steering adjustment is only limited to tilt - even the new i20 Magna offers both tilt & telescopic adjustment. Kia could have also added illuminated power window switches and paddle shifters in the auto trims but they didn't.

GT Line Priced at a Premium

The base variants of the Kia Sonet undercuts the Venue by a margin. However, the same can not be said for the top-spec trims - like the GT line. They may turn your head upside down but the Kia Sonet is the most expensive petrol sub-compact SUV on sale. The 1.0-litre iMT GTX+ is more expensive than Ford EcoSport 1.5 AT. Kia could have gone a bit more aggressive in the pricing department given the limited reach sales and service touchpoints. 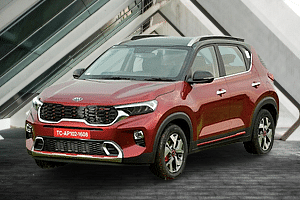