Here Are Ideas To Improve Cycling Infrastructure In India 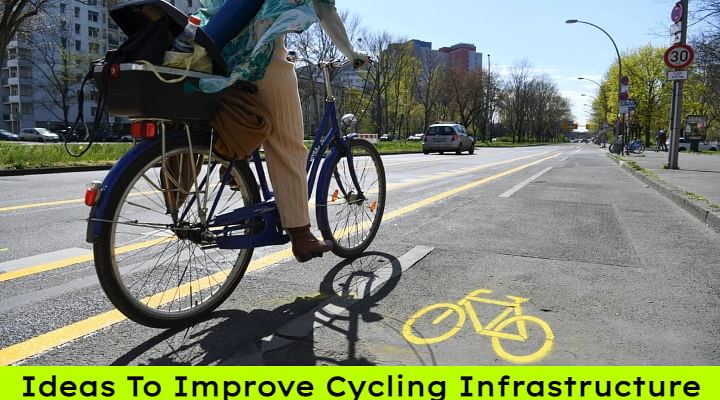 Cycling is one of the most reliable and efficient means of travel that mankind depends on especially in India where more than 50 per cent of the total population makes practical and effective use of non-motorised means of transportation. The busy Indian roads have motors cars and bikes buzzing around along with bicycles that should actually be ridden on Cycle lanes but the lack of it makes every ride a risky ordeal.

Today, we discuss few ideas revolving around how India can improve its bicycle riding experience in terms of a safe venture out from the traffic and also how to encourage people to use a cycle for the benefit of its users and efficient traffic control.

The following are the different types of cycling infrastructure that can be implemented in India to get more people to utilize it:

Wider bicycle lanes: It is believed that people like riding on bigger roads as it is easy to manoeuvre and takes less toll on the body hence, wider bicycle lanes will attract the attention of more cyclists.

Bicycle rental systems/ docking stations: Firstly, affordable bicycle subscription systems which have the flexibility to be accessed by tourists and the general public at any point in time allows for better usage of bicycles in the country. In addition to this, the ability to cancel at any point by the subscribers will make it more appealing to the public.

Secondly, vehicles to transport cycles to whichever docking station that has all the bicycles out on ride can benefit and attract more users. Connectivity is the key to more users of bicycle rental/subscription systems.

Also Read: Check Out The Top 5 Cycling Trends Of India In 2021

Traffic signalling for Bicycles: European countries have already established traffic signalling that prioritises cyclists. India can also take up such an initiative to fit traffic lights for cyclists, for them to easily cross roads and intersections without raising the risk of being hit by motor cars and bikes.

1.Cycle Hire Schemes: As mentioned earlier, bicycle rental schemes can be implemented under which tourists or the general public can access cycles for short trips within the city at an affordable price.

3.Road safety education: As mentioned earlier, more than 50% of the population depend on non-motorised means of transport in India, however, they lack the knowledge of traffic rules meant for cyclists. An awareness program can be created with the help of local NGOs to spread knowledge on road safety for cyclists as well as users of motor vehicles. This will help both bicycle and motor vehicle users to ride and exist side-by-side on our roads.

4.Cycle to work scheme: The government could provide tax benefits for the employees who ride a bicycle to work. This is a sure way to increase bicycle users in the country.

Also Read: What Are E-cycles and How Do They Work? All That You Need To Know

What do you have to say regarding these few cycling infrastructure based ideas for India? Please tell us your thoughts in the comment section below. Also, join our 91Wheels Telegram and 91Wheels Whatsapp group to know more about vehicles, conduct discussions on your favourite ride and much more!